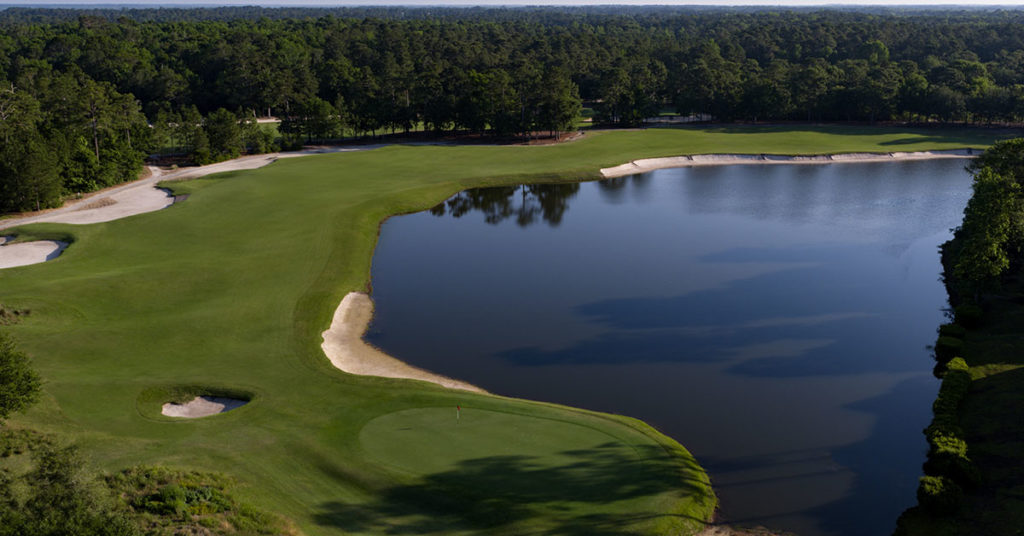 Dale’s love for Strantz’s work prompted him to offer his own hole-by-hole insights he gleaned from his experience at True Blue. Here, in the first of three parts, is Dale’s take on the first third of his True Blue playing journey:

Hole No. 1: “#1 is a par five that is the hardest-rated hole on the course. This is where the brilliant hole design comes in to play … Note how wide the fairway is with a waste bunker down the left-hand side. If you are playing from the appropriate tees for your handicap this is always going to be a three-shot hole. I found this out the hard way by smacking a three wood and having it trickle into a small stream that guards the elevated green. There is no way I could ever reach the green in two.”

Hole No. 2: “This is the first of many quite short par fours that call for brains and not brawn. It is a blind tee shot to a dogleg right and the course map will give you a better idea of what you are facing. It’s only 271 yards so all you need to do is hit a 5 wood to the fat of the fairway. The difficulty is the second shot as the green is long and narrow. The pin was at the very front which made it next to impossible to get close to. Still, I like a hole that does not require a driver, but does demand good control of the short irons for the second shot.”

Hole No. 3: “This is the first of five par threes, most of which are top calibre holes including this one. I’ve never played a course where so many of the bunkers tapered off to a water hazard. Obviously this is 100% carry so club selection is everything – choose the right club and this is an easy par, choose the wrong one and expect double-bogey.”

Hole No. 4: “Another strong par five using the classic modern technique of circling a pond and daring the big hitters to go for it in two. Not being John Daly, most people will play this as a three-shot hole.”

Hole No. 5: “#5 is a dogleg left that requires avoiding all the crap down the left-hand side to get a decent chance to reach the green in two. Definitely a driving hole. If you do get that straight drive it’s still going to be at least 150 yards in for the shorter hitter. Rated as the #13 hole, I thought #5 played a lot harder than that.”

Hole No. 6: “Teeing off I had no idea what it (tee sign saying PLAY RIGHT GREEN TODAY) meant, so I just tried to hit it down the middle. Easier said than done, as I went way left, but the fairway is so wide that I don’t think even Phil Mickelson at his wildest could have missed this fairway. Driving to my ball I then realized that, yes, there was a right and wrong green. The right green had a pin in it and the wrong green on the left had none.”