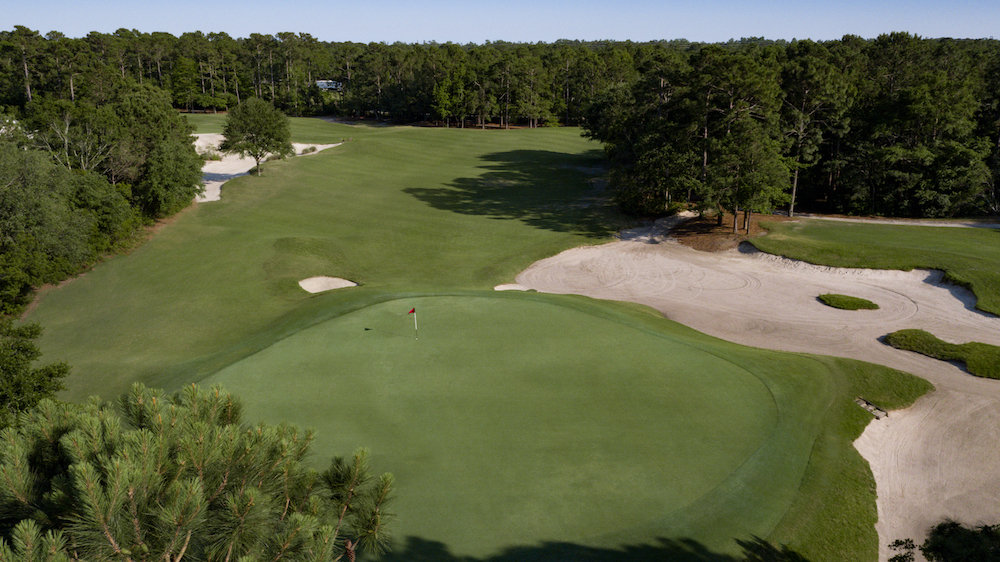 Dale’s love for Strantz’s work prompted him to offer his own hole-by-hole insights he gleaned from his experience at True. Here, in the second of three parts, is Dale’s take on holes 7-12 of his True Blue journey:

Hole 7 – “#7 is another good looking par three with a large tiered green. Not a hard hole if you avoid missing right. Otherwise forget trying to get close to the pin from green side bunkers – just as likely to fly the green and land in the bunker on the other side. Don’t ask me how I know this.”

Hole 8 – “Beside the tee at #8 there’s (a) sign (reading “164 Yards to Fairway Over Rock”). Makes sense until you try to spot the rock from the tee. Hopefully you’ll have a pair of binoculars handy. The hole is a severe dogleg right and if you just hit over the right side bunker you’ll be fine. Once you get up there you’ll see the rock hiding behind a clump of grass.”

Hole 9 – “The third par 5 on the front is by far the longest and, in my opinion, nastiest … After you hit a smoking drive like I did, you are faced with (a lengthy second shot to clear the waste area) … No choice but to hit a wimpy 9 iron to the edge and then try to hit a decent 150-yard shot over the crap to a tiny green with traps all around it. This should be a par six. You don’t return to the clubhouse after the front nine, so make good use of the cart girl.

Hole 10 – “… Another gruesome par 5. Not as hard as #9, but right up there. Trust me, it’s a lo-o-o-ng way to the end of the first part of the dogleg. (A decent drive) meant firing over the waste bunker to get close enough for a decent third. Also, you can see houses on the left. The front nine is virtually free of any distractions which is one of the reasons I really liked it (despite the evil par fives). The back nine has houses on a few holes, but nothing compared to a lot of Myrtle Beach courses.”

Hole 11 – “#11 is another all carry par 3, but short enough that it shouldn’t be a problem for most golfers. Again, it’s the club selection that is everything. By now there is no doubt that most golfers will have had to hit at least a few shots from the hard packed waste bunkers. I wish I had some good tips on how to accomplish these shots, but I can’t help other than to say ‘Don’t skull it.’ That always draws a favourable response from my playing partners – not.”

Hole 12 – “I really enjoyed playing this hole. As you can see a mostly wide fairway. It’s followed by a dogleg right to a small green. Nothing to it.”