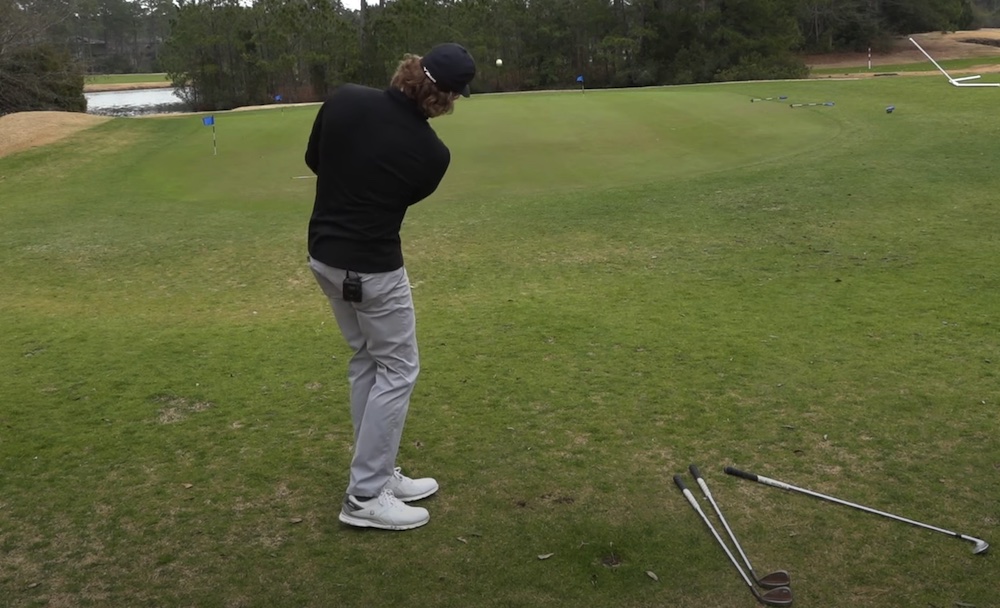 Stuart Clark from the Steve Dresser Golf Academy, located at True Blue Golf Club in Pawleys Island, S.C., shows us how and why to hit pitch shots with different trajectories from the same ball position. Stuart demonstrates the proper technique for hitting it with a low, medium, and high ball flight.

How are you doing, guys? My name’s Stuart Clark. I’m one of the instructors here at the Steve Dresser Golf Academy at True Blue and Caledonia. Today, we’re going to talk about trajectory and pitch shots. As you can see, I’ve got it set up here. I’ve got basically a 30-yard pitch. And you’ll see there’s a line of stakes laid throughout the green. And what this is, it’s for me when I’m practicing. It lets me know what trajectory and where I’m going to land it.

So, you can see I’ve got three lined up there, and the yellow one is close to the (edge of the) green. So, this is where I would take a lower lofted approach to this shot with maybe an eight or nine iron. If I got set up there, I would pressure my lead foot. So, I’m going to put a little pressure on my lead foot. My sternum is a little left. And I’m just trying to get this thing running low, and I want to land it right about that yellow target. Let it run out. So, we’ll see that run out.

Then, you see the white one. I’m going to need a little bit more lofted club. I’m not going to change a whole lot about my technique. The ball is going to go higher because it is a more lofted club. Because a lot of times we don’t know what kind of shot we want to hit, we don’t see that trajectory, so we have to understand the trajectory of these pitches. So, I haven’t done anything differently. I’m going to step up and I’m going to land about the white stake now … so it’s going to be a little higher. Put a little more speed to it. It’s going to land about the white flag. It’s going to chase down the target. I’ll take that one, too.

And now you see I’ve got the green one down there, so does everybody want to guess what I’m going to use with this one? This is going to be my 60, which I always tell people, “If I got the opportunity to get it on the ground, I’m going to get on the ground quick.” But, this is just for me, say, if I’ve short-sided myself and I have to hit a high, soft floated shot. So, now we’re going to try that little 60 degree shot. We’re going to put it up in the air a little more, land it about that flag. And I’ve hit that way too hard, but we got a good idea about it. Anyhow. But, that’s showing you three different flighted shots, not that I changed my technique so much, but I just used different clubs. That’s your “Tip Tuesday!”